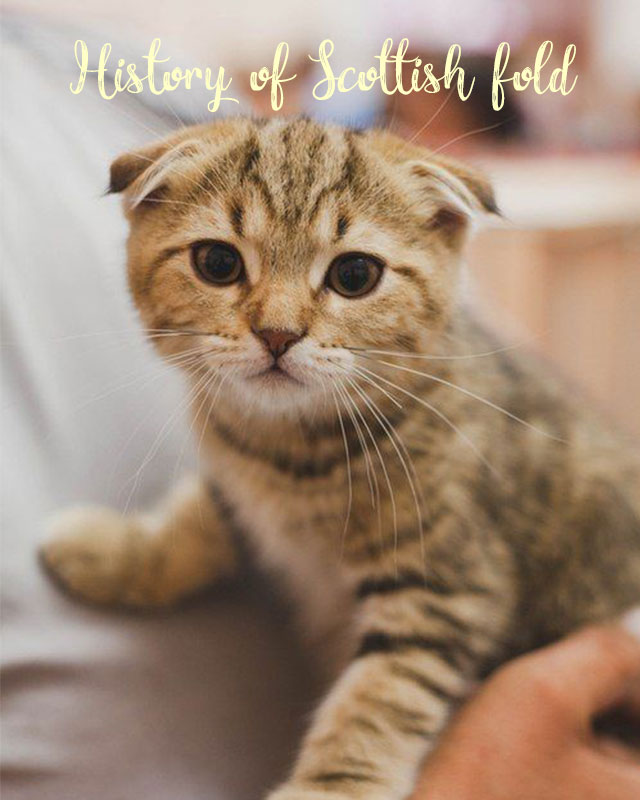 The Scottish Fold first appeared in the year 1961 on The McRae’s farm in Scottland. A Scottish shepherd named William Ross came across an unusual white cat with closed down ears.

The cat that William Ross found was just your ordinary barnyard feline that the McRae’s named Susie. While talking with the McRae’s Ross discovered that Susie’s mother had straight ears, where as the father of Susie is still unknown. Therefore, Susie was not the first Scottish Fold cat of the Scottish Fold era. Although Susie had a brother that was also a fold, but one-day Susie’s brother had ran off and was never, seen again.

In addition, Snowball bred with a white British female cat named Lady May, Lady May produced five kittens, making it possible for William Ross to establish his breeding program in the future.

However, in 1961 these cats where not called Scottish Fold Cats, instead they were better known as lop eared cats being named after the, lop eared rabbit. In 1966 the breed was renamed the Scottish Fold, and by that time William Ross and his wife Mary began a breeding program. That introduced a new breed of Scottish Fold Cats to the world.

The Scottish Fold had to leave Scottland due to certain ear problems that the Scottish Fold possessed. Like Contagion, which means the communication of disease by contact? Other ear disorders include mites, which mean numerous tiny Arachnids that are often parasitic on animals and plants.

In the year 1970, three of Snook’s kittens were, sent to the United States, under the care of Dr. Neil Todd. Dr. Neil Todd studies Genetic Research on animals in Massachusetts, and he studies animal mutations. Later Dr. Neil Todd abandoned his research, but located homes for the three Scottish Fold cats.